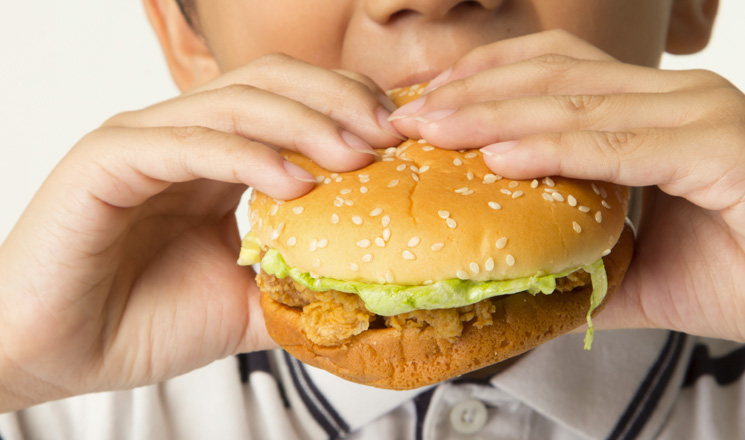 Obesity carries a penalty of an associated adverse cardiovascular risk profile. Largely as a consequence of this, it is associated with an excess occurrence of cardiovascular disease morbidity and mortality. (Department of Preventive Medicine, University of Tennessee)

Being overweight is a significant risk factor for gallstones. In such cases, the liver over-produces cholesterol, which is then delivered into the bile causing it to become supersaturated. Some evidence suggests that specific dietary factors (saturated fats and refined sugars) are the primary culprit in these cases

There are multiple reasons why obesity causes hypertension, but it seems that excess adipose (fat) tissue secretes substances that are acted on by the kidneys, resulting in hypertension. Moreover, with obesity there are generally higher amounts of insulin produced. Excess insulin elevates blood pressure.

Obesity can also cause respiratory problems. Breathing is difficult as the lungs are decreased in size and the chest wall becomes very heavy and difficult to lift.

In other words, about 3.2% of all new cancers are linked to obesity

Obesity has been found to be linked to sleep apnea. Also, weight reduction has been associated with comparable reductions in the severity of sleep apnea.

Rising obesity rates have been linked to more strokes among women aged 35 to 54.

One of the strongest risk factors for type 2 diabetes is obesity, and this is also one of the most modifiable as it can be partially controlled through diet and exercise.

There are some diseases that are seen with increased frequency in persons who are obese, including certain types of cancer, diabetes mellitus, coronary artery disease, stroke, hypertension, cardiomyopathy, non-alcoholic steatohepatitis, osteoarthritis, reproductive problems, sleep apnea, and gallbladder disease.

The following cancers are seen with increased frequency in persons who are overweight:

A third to half of cases of endometrial carcinoma occur in women with a BMI >29. Breast cancer risk is increased with obesity only for women who are postmenopausal. Half of cases of breast carcinoma in postmenopausal women occur in association with a BMI of >29. Risks for cancers of the lung, colon/rectum, and breast are diminished with healthy lifesytle/dietary patterns. (

For persons who are grossly overweight (BMI >40) the risks are greater, with death rates from all cancers for men more than 52% and for women more than 62% greater than in persons of normal weight. The range of cancer types is broad, including esophagus, colon, rectum, liver, gallbladder, pancreas, kidney, non-Hodgkin lymphoma, and multiple myeloma in both men and women. In, prostate and stomach cancers are more frequent with increasing BMI, while in women breast, uterus, cervix, and ovarian cancers are more frequent.

The prevalence of DM type II in the U.S. increased by 25% in the last decade of the 20th century.

A characteristic pathologic finding in the islets of Langerhans of the pancreas can be seen in association with type II diabetes mellitus. A major complication of diabetes mellitus results from the accelerated, advanced atherosclerosis.

Diabetes or impaired fasting glycaemia or impaired glucose tolerance or insulin resistance, plus 2 or more of the following:

Patients with both type 2 diabetes and the metabolic syndrome are at increased risk for cardiovascular complications from both arerial and arteriolar disease. They should be treated to keep the Hgb A1C under 7%

Therapeutic goals and recommendations include:

Persons with diabetes mellitus are at increased risk for accelerated and advanced atherosclerosis that increases the risk for coronary artery disease that can lead to myocardial ischemia and myocardial infarction. However, even obese persons who do not have hyperglycemia can have an increased risk for coronary atherosclerosis. Obese persons have a >50% risk for a total serum cholesterol >250 mg/dL. In contrast, a study of middle-aged women revealed that those who did not smoke, were not overweight, maintained a healthy diet, and exercised at least moderately for a half hour each day had an incidence of coronary events 80% lower than the rest of the population.

Atherosclerosis is potentially reversible. Adoption of major lifestyle changes including diet and exercise in middle aged adults can lead to lowering of LDL cholesterol levels by 37% in just one year and reduce the amount of coronary arterial stenosis.

Persons who are obese tend to have an increased blood pressure. Hypertension that is untreated can increase the risk for heart failure, kidney failure, and stroke.

The rate of ischemic cerebrovascular disease is 75% higher in women with a BMI >27 and 137% higher in women with a BMI >32, compared to women with a BMI of 21 or less. Though not included in this study, risks for men are increased as well. The prevalence of cardiovascular diseases and their complications increases as the amount of dietary sodium increases. It is estimated that if adults from 40 to 85 years of age in the U.S. were to decrease sodium intake by just 9.5%, there would be 1 million fewer deaths and $32 billion saved in health care costs over their lifetime.

Some obese patients who have little or no coronary artery disease and do not have a history of hypertension may still develop heart failure. In these patients, the heart is globally enlarged, similar to a dilated cardiomyopathy. If such persons lose weight, the heart diminishes in size. This obesity cardiomyopathy may be related to blood volume expansion or other factors.

NAFL is being recognized more frequently. Dietary patterns play a role in the development ofsteatosis (fatty change) in the liver. Obesity increases the risk for alterations in hepatocyte function that lead to accumulation of lipid in hepatocytes and hepatomegaly. NAFL reduces the metabolic function of the liver. NAFL can proceed to non-alcoholic steatohepatitis (NASH), to liver failure, and even cirrhosis, with an increased risk for development of hepatocellular carcinoma

Increased weight will increase the stress on weight-bearing joints, particularly lower extremities, leading to osteoarthritis. A BMI of 30 or more markedly increases the risk for osteoarthritis of the knees. Interestingly, obese persons are less likely to have osteoporosis, but osteoarthritis more than makes up for this.

Women who are obese are more likely to have menstrual irregularities and ovulatory infertility, including the polycystic ovarian syndrome (PCOS). Women with PCOS typically have irregular bleeding, hirsutism, and/or infertility in association with chronic anovulation and androgen excess not attributable to another cause. PCOS is estimated to occur in 4% of women, but there is an increased prevalence with diabetes mellitus and obesity. Conversely, women with PCOS are more likely to have obesity and diabetes mellitus. PCOS is characterized by insulin resistance, hyperandrogenism, and abnormal gonadotropin release with inadequate follicle stimulating hormone release, leading to anovulation. Weight loss can aid in treatment of PCOS.

Obesity in women who are pregnant increases the likelihood for gestational diabetes that can affect the developing fetus. Maternal obesity increases the risk for macrosomia, stillbirth, and neural tube defects. The increased maternal risks include hypertension, pre-eclampsia, and hemorrhage.

Persons who are obese have a greater likelihood for obstructive sleep apnea (OSA), or periods of absent breathing while asleep. OSA is the major feature of obesity hypoventilation syndrome, which is defined by a body mass index of 30 or more along with sleep-disordered breathing and chronic daytime alveolar hypoventilation with PaCO2 of 45 mm Hg or more and PaO2 less than 70 mm Hg. Persons who snore while sleeping have a propensity to develop sleep apnea. The increased soft tissue in upper airways contributes to the problem. Sleep apnea is accompanied by decreased ventilation (hypoventilation) and pulmonary dysfunction.

Biliary tract lithiasis, manifested mainly by development of cholelithiasis (gallstones), is more likely to occur in persons who are obese. The gallstones are typically of the mixed type with cholesterol. Cholelithiasis can lead to cholecystitis and to pancreatitis.